Ureteral stones are called hard masses seen in the ureter. For the diagnosis of ureteral stones, the medical history of the patient is taken and examined in detail.

Ureters are our organs that enable the transport of urine, approximately 25-28 cm long, from the kidney to the bladder in adults, which come from the exit of the collecting system of both kidneys to the urinary bladder.

The ureter has strictures in 3 places and stones are usually attached to these strictures. The first is at the exit of the kidney, the second is where it crosses the great vessels, and the third is where it enters the bladder, i.e. the urinary bladder.

What Is Ureteral Stone And How Is It Formed?

Generally, stones are not formed in the ureter, but stones formed in the kidney come to the ureter and get stuck in the strictures mentioned above. However, if the stones remain in the ureter for a long time, their size may increase. Stones smaller than 4 mm in the ureter usually fall off spontaneously if there is no anatomical disorder.

Stones smaller than 1 cm theoretically have the potential to fall if there is no abnormality in the ureter. However, if it causes obstruction by preventing the passage of urine, it should be treated urgently.

Otherwise, urine accumulates in the upper part of the ureteral stone and in the kidney, causing dilatation. If left untreated, kidney failure develops.

Why Are Ureteral Stones Urgent? 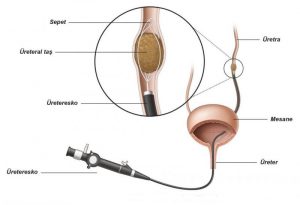 Ureteral stones are urgent for 3 reasons. The first prevents the ruling movement. Renal failure may develop by causing enlargement of both the upper part of the ureter and the kidney.

Second, infection develops due to urinary tract obstruction and this may cause renal failure due to pyelonephritis.

The third is very painful. It is one of the most severe pains. It is described as pain that is difficult to bear.

What are the Symptoms of Ureteral Stone Disease?

The most important symptom of ureteric stones is pain. The location of the pain may vary depending on the location of the stone. It usually starts in the form of abdominal pain and then begins to show itself on which side it is. The character of the pain begins slowly, becomes more severe and unbearable, then gradually slows down and then repeats in the same way. We call this type of pain colic pain.

Its medical name is renal colic. The reason for this is that the ureters contract to expel the urine passing through the ureter tubes, because there is a stone in front of it and the urine cannot pass, it contracts more and both the ureter and kidney are stretched.

In this case, it causes very severe pain. Ureteral stones are not silent like kidney stones and are usually noisy. Other symptoms are nausea, vomiting, and urinary bleeding. If infection has occurred, there may also be fever.

In order to make a diagnosis, first of all, a medical history including diseases, surgeries, and additional diseases is taken and a detailed physical examination is performed. When hitting the side of the stone in physical examination, there is severe pain. Then, tests such as urine-blood analysis, ultrasound, x-ray computed tomography are performed for the cause of the symptoms.

At the end of all these evaluations, a diagnosis of ureteral stone is made and its method is determined. The presence of bleeding or inflammation in the urinalysis gives us a clue in terms of stone disease. Most stones can be seen on x-ray, but some stones are not.

Ultrasonography can show stones in the lower and upper ureter, but not stones in the middle ureter. Computed tomography (CT) is very important to identify ureteral stones. CT can detect stones over 2 cm at any level and its diagnostic value is the highest. The disadvantage is that it involves radiation, so we try not to have tomography under the age of 40 if it is not necessary as much as possible.

How Are Ureteral Stones Treated?

Stones in the ureter cause obstruction in the urinary tract or if they are likely to be in character, they should be treated urgently. If left untreated, difficult-to-compensate kidney failure can lead to complications such as sepsis.

Stones over one cm are difficult to fall off spontaneously and should be treated when detected. If ureter stones smaller than 1 cm lead to pain that did not cause obstruction or infection, it can be expected to fall spontaneously for 2 weeks by giving medication.

However, this process is followed closely. Generally, stones below 5 mm fall spontaneously if there is no anatomical disorder in the ureter. If the stones are between 5-10 mm, there is a possibility of falling, but should be followed closely.

What Are Ureteral Stones Treatment Methods?

If the ureteral stones are less than 5 mm and there are no symptoms at all, or there are no symptoms of severe pain and congestion, drug treatment is given, and it is expected to decrease up to 4 weeks. If it does not fall, one of the treatments of extracorporeal shock wave therapy (ESWL) or ureterorenoscopy (URS) is preferred depending on the location of the stone. If it is unbreakable with ESWL, URS is done.

If ESWL fails, other methods are used. URS is the event of entering the ureter from the external urinary tract, which we call ureter, with a thin instrument with a URS camera, and then into the urinary tubules, and the stone breaking up in between using laser.

ESWL is when the stone breaks from the outside with shock waves. Laparoscopy, on the other hand, is the process of removing stones from ureteral tubes with cameras and other instruments from rodlets, which we call 3 trocars. The success of all methods is 80-95%.

What Should Be Done To Prevent Stone Recurrence?

Some patients with kidney stones may develop more stones in the future. After the stone has been dropped or removed, it should be determined whether there is a risk of recurrence. To do this, it is necessary to analyze the stone.

If the risk of recurrence is low, general lifestyle changes will be sufficient to reduce the risk of forming another stone. If you have a high risk of recurrence, a series of specific blood and urine tests called metabolic assessment are performed for kidney stones (metabolic assessment). Depending on the test results, preventive measures or further testing are recommended. These;

It is always a good idea to adopt a healthy lifestyle.

You can fill out the form below to contact me, get information and make an appointment. Our coordinator will call you as soon as possible.